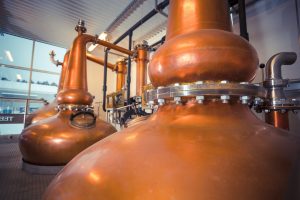 Lahti-based Teerenpeli Brewery & Distillery has won the “Worldwide whisky producer” series in the world’s largest alcohol competition, the International Wine and Spirit Competition. The winner was  announced on the 18th of November 2020.

alcoholic beverages in London. Four skilful producers were invited to be in the final round as a

nominee for the Best Worldwide Whisky Producer 2020. The nominees with Teerenpeli this year

Australia. Scotch whisky producers had their own category in the invitational competition.

“It was a great honor for us to receive our first candidacy to Finland in this competition. But the

fact that we won the series is of course a tremendous recognition of almost 20 years of work”,

Mr Anssi Pyysing, an Entrepreneur and CEO of Teerenpeli considers the victory as a big surprise

but he also sees many good reasons for it. “The location of Teerenpeli Distillery is perfect for

whisky making. The groundwater filtered by the Salpausselkä ridges is the best in the world. Barley

Distillery. On top of that adding all the experience, skill and passion of the excellent staff at

Teerenpeli, you end up being the best in the world.”

The IWSC awarded Teerenpeli Distillery whiskies with top mentions in the summer. The Whisky

describes. “Now we are playing at a truly international level, which of course fits very well in our

Teerenpeli signed this year new export agreements with companies in Belgium and Luxembourg.

Whisky exporting to Germany and Sweden is also increasing, and an agreement with a Swedish

Teerenpeli Group is a family business owned by Anssi and Marianne

Pyysing. Company runs whisky distillery and brewery in Lahti, Finland and ten restaurants all over Finland.

Teerenpeli Group is established year 1994 and it employs more than 100 people.